Who could have possibly written a better soundtrack to heroism than Ludwig van Beethoven in his Eroica Symphony? We'll hear it, and similar music, in these two Concert Hours.

Your ticket to the German classical music festival scene: Concert Hour has the picks of the season — two hours of music updated regularly.

Along with host Rick Fulker, the musicians themselves are on hand to give their insights into the events and the music.

In this and the coming weeks, we visit the Schwetzingen Festival, which took place this time in October and where the focus was on Ludwig van Beethoven in the 250th year after his birth.

Dating from 1797, Wranitzky's Grand Symphony Characteristic of Peace with French Republic is the first known piece of music to be forbidden in Vienna due to its political content, axed just before the premiere. In aristocratic circles in Vienna, memories were still fresh of beheaded royalty in France in the wake of the French Revolution. Austria had been forced into peace with the French, and Wranitzky's music sounded Francophile and seemed to put the enemy in a good light.

But as Bernhard Forck, concertmaster of the Academy of Early Music Berlin explains, Wranitzky's Grand Symphony is a good companion piece for Beethoven's Eroica: "Like the Eroica, it has a funeral march. The drums sound out a big battle, so this symphony tells of war. But also of the ambivalent zeitgeist in Vienna. People were enthused about the French Revolution at first, but that feeling changed when Napoleon's troops occupied the Rhineland, and it was unclear what would happen in Vienna."

Other composers such as Johann Wilhelm Wilms wrote pieces based on works by Paul Wranitzky, such as Wilms' Variations on an Ariette from Paul Wranitzky's opera "Oberon."

Explaining the idea behind this program, Bernhard Forck said, "It's amusing to look at Beethoven's letters, where he writes to his publisher saying: 'Send me everything you've got, starting with Bach and his sons.' It was very important to him to be schooled in the old masters and works by his contemporaries." One composer whom Beethoven particularly venerated was Carl Philipp Emanuel Bach.

The word "Eroica" sounds like "heroic," which is no coincidence — and Beethoven's choice of the word has to do with Napoleon Bonaparte, who ignited the imagination of a generation — Beethoven's generation.

Beethoven's third symphony, the Eroica, is big in every way — not only in length, but also in terms of ideas. 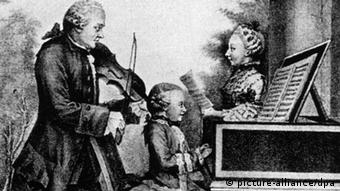 Yet, says Bernhard Forck, concertmaster of the Academy of Early Music Berlin, there's one aspect of the Eroica that's surprisingly small: "When we were in Vienna two years ago we went on an exciting city tour and stopped at the places where Beethoven's works premiered — including the Eroica Hall in Lobkowitz Palace. Very interesting: The room is so small you think you could hardly fit an orchestra in it, much less an audience too. So how big an orchestra could it have been? Obviously it must have been a very, very small one — which you wouldn't normally think with a work like the Eroica."

The Academy of Early Music Berlin precedes its performance of the Eroica with a brief intrada by Mozart with a strikingly similar theme.

The iconic figures in 'One Night in Miami'

Regina King's film "One Night in Miami" imagines what happened on the night Malcolm X, Cassius Clay, Jim Brown and Sam Cooke hung out together in 1964.

A refugee's graphic journey to a better world

"Temple of Refuge" illustrates Iraqi-Kurdish migrant Sartep Namiq's journey to Berlin. It was commissioned with the help of a unique organization.

TikTok has turned "Wellerman," a 19th-century sea shanty, into a viral hit. The collective musical experience expresses the hopes and pain of our pandemic world.

When the Bottrop coronavirus vaccination center opens, people will be in for what is a rare treat theses days: a sculpture exhibition in the middle of the vast hall.

Darknet: More than a cybercrime network

Drug dealers, contract killers, pedophiles: The darknet is too often associated with crime. But it's also an essential space for freedom of expression.