The German who went from left-wing terrorist to Salafist sympathizer | Germany| News and in-depth reporting from Berlin and beyond | DW | 25.10.2018

The German who went from left-wing terrorist to Salafist sympathizer

Bernhard Falk is no stranger to prisons. A convicted leftist terrorist, he spent 12 years behind bars. Now he looks after imprisoned Islamists. Germany's domestic intelligence agency considers him a danger to society. 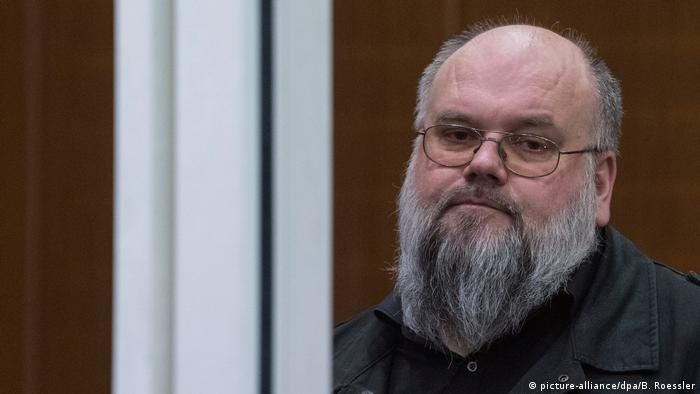 One of the advantages of a constitutional state that ensures the rule of law is that it also applies those rights to people who deeply reject it. Even those who want to abolish the democratic system and fight by force for an Islamic state have the right to a fair trial with a lawyer of their choice. And this is exactly where Bernhard Falk's self-proclaimed line of work begins. An imposing man with a large graying beard and balding head, he describes himself as an "emergency responder."

Falk's places of deployment are courtrooms and prisons. He looks after Islamist prisoners and travels the country up and down: returnees from Syria who presumably fought for the self-proclaimed Islamic State (IS) or other jihadi groups; members of the German Salafist scene who are accused of having recruited for jihad or of having helped young men on their way out to the Middle Eastern war zone; Islamists who are suspected to have sent money or equipment to the IS area and radicalized people who are prosecuted for planning terror attacks in Germany. For Falk they are all "Muslim political prisoners."

Read more: Salafism in Germany: What you need to know

Exactly 122 names are on the multi-page list which Falk presents to DW in a Frankfurt park. He has just attended the trial against Bilal Gümüs in the neighboring regional High Court. Gümüs is said to have helped a 16-year-old boy leave for Syria to join IS. Only a few weeks after his disappearance the student was killed.

It is no coincidence that Falk calls people like Gümüs "political prisoners of the FRG (Federal Republic of Germany)." Nor is it a coincidence that in his YouTube videos he regularly describes Germany as the "heart of the imperialist beast": Bernhard Falk has a left-wing terrorist past. He committed several attacks, was convicted of attempted murder in four cases and served over 12 years in prison. He was released in 2008.

His time behind bars spurs him on, says Falk, especially the five years in pretrial detention. "My trial at the Dusseldorf Higher Regional Court lasted 134 days. Based on this experience, I told myself that it was really time to help Muslim political prisoners who usually do not know their rights, to exercise them." 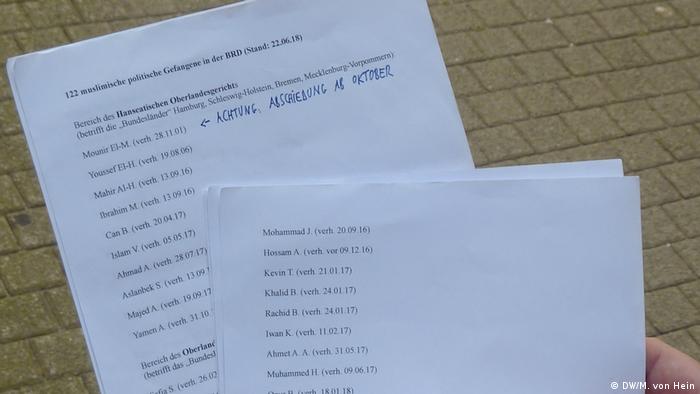 Falk emphasizes that his Muslim faith helped him to endure the long imprisonment. The path to Islam did not come naturally to this German convert who grew up in the North of the country. He was raised in a Catholic family and was an altar boy for 10 years. While his brother became a Catholic priest, Falk studied elementary physics at university in Aachen.

Through his studies he got to know an Iranian woman and, because of her, he engaged with Islam for the first time. In addition to what he called the "revolutionary potential of Islam," he was fascinated by "its logic" and the call to use the senses. While Falk was still building bombs for the "Anti Imperialist Cells," the left-wing radical with Catholic roots became a Muslim.

"Brother" Muntasir bi-lllah, as he has called himself ever since, is wide awake in his conversation with DW, and he chooses each of his words very carefully. Even if he is not a lawyer, the 51-year-old, dressed entirely in black, knows how far he can go without coming into conflict with the law.

Read part I of our series on Salafism: Invisible and dangerous: The Salafist scene in North Rhine-Westphalia

Read part II of our series on Salafism: From Germany to 'Islamic State': Christian's journey

Read part III of our series on Salafism: Abu Dujana: The Salafi preacher

Open support for terrorist organizations such as IS or al-Qaeda will not slip from his mouth. Instead, he expresses "understanding" that some people go the way of terror, a term Falk himself replaces with "militant resistance."

"If people in different countries think they are choosing certain methods, that's their decision," he says. "The fact that there is militant resistance from groups worldwide is a fact, whether you like it or not."

'Prisoners are not heroes'

Falk does not deny the fact that amongst the prisoners he looks after, some have "a criminal past from a German point of view. Prisoners are not heroes, after all." But he does not want to judge them. "I am someone who tries to show a certain solidarity regardless of what has happened in the individual case." That is why Falk also supports Salafist preacher Abu Walaa.

The Iraqi-born man is regarded as IS' top ambassador in Germany. Walaa has been on trial in Germany since September 2017, accused of having recruited young men for IS' self-proclaimed caliphate. Falk also assists Sven Lau, one of Germany's best-known Salafists. Judges sentenced him to five-and-a-half years imprisonment in July 2017. According to the court, Lau had lured recruits for the jihadist militia "Jamwa" (Army of Expats and Supporters) in Syria. 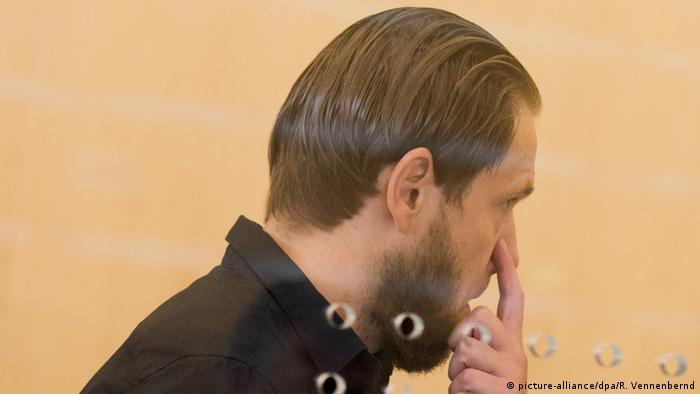 Sven Lau, recently sentenced to prison for supporting Islamist foreign fighters, was among those who Falk helped

Falk has also reached out to Yasmin H. She is the wife of the suspected Islamist terrorist Sief Allah H., who this summer became known as the "Ricin bomb maker" of Cologne. Tunisian-born Sief Allah H. had ordered large quantities of castor bean seeds via the internet. Additionally, he obtained chemicals with which he could have extracted highly poisonous ricin from the castor seeds. According to the police, there were also ingredients for an explosive device in his apartment.

Yasmin H. is said to have supported her husband in the preparations for the attack, and she has been in custody in Gelsenkirchen since July. "When I visit the wife who has been imprisoned because of the so-called ricin case, I discuss with her whether her television set has finally arrived in her cell and whether she finally has a book to read," Falk says, describing his work.

When asked about his spiritual orientation, he points to the radical Wahabi preacher Sulaiman al-Ulwan from Saudi Arabia, who advocates the theory of militant jihad. Al-Ulwan has justified suicide attacks against Jews and welcomed the destruction of the famous Buddha statues of Bamiyan by the Afghan Taliban.

The fundamentalist preacher also praised the Taliban's late leader Mohammed Omar as "commander of the faithful." This ideological proximity to al-Qaeda led to al-Ulwan spending time in Saudi prisons.

Falk is also occasionally accused of being close to al-Qaeda, most recently this September by Eren Recberlik. For years, the German security authorities classified Recberlik as a Salafist threat. He has since left the scene and is cooperating with the authorities. 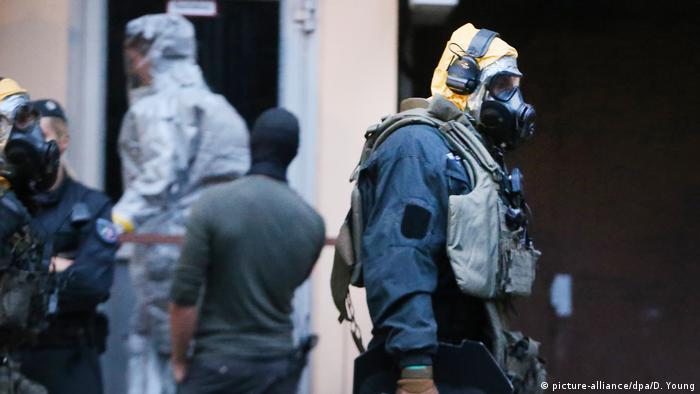 Falk's name is regularly mentioned in the reports issued by Germany's domestic intelligence agency, the Office for the Protection of the Constitution (BfV), in the state of North Rhine-Westphalia, where he lives. The most recent report notes: "[Falk] is of the opinion that the Federal Republic of Germany is engaged in a fight against 'Islam' and stands for what he considers to be the urgently necessary 'Islamic resistance against the imperialism of the United States, the FRG and Israel.'"

The security agencies have taken note of his positive statements on al-Qaeda groups and ascribe "Falk at least ideologically to the area of jihadi Salafism." Burkhard Freier, who heads the BfV in North Rhine-Westphalia, sees a great danger in Falk's care of prisoners. "In reality this is a care of extremists for persons who are to be kept in the extremist scene," he told DW. "The prisoners shall be kept from any resocialization."

Falk confidently counters this: "If the prisoners still have any social connections at all and can think and act socially after their imprisonment, then I have contributed to this. A collapsing or psychologically drifting prisoner can't be in the interest of the state either." On his Facebook page, Falk regularly asks others to write encouraging letters to imprisoned Islamists or to pray for them. He also appeals to donations for his work. "I depend on people from the scene, mostly relatives, to give me a donation so that I can travel to distant cities."

Books in Cologne, Children in Dortmund

Falk is not pursuing a regular job. He accuses the state police of creating bias against him among potential employers. He insists that he does not receive any state support, such as unemployment benefits or social assistance. Falk has no single apartment of his own: "You could say that my books are in Cologne. My children are in Dortmund. For space reasons alone, neither is conceivable within one apartment."

Read more: Mosques in Germany: Statistics hard to come by

The children are also sometimes present on Falk's Facebook page, most recently when his daughter Shahida started school this summer. The fact that his daughter goes to a completely normal primary school doesn't seem to cause him any problems: "It's about teaching facts and language in a clean form. And everything that is part of a child's education," explains Falk. "A Protestant kindergarten or even a Christian school will certainly be able to do this," he says. "You can see from my example that one can also find the way to Islam as the son of a Christian head teacher." 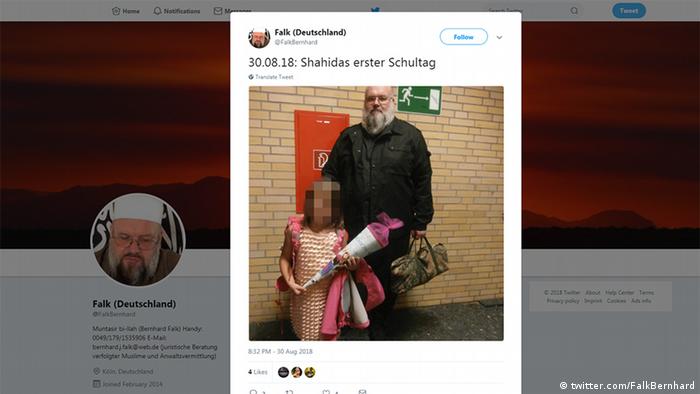 Despite his strong religious convictions, Falk sends his daughter to a regular primary school

In the eyes of the former left-wing radical, religion fits perfectly into his fight against what he still calls the "imperialism of the USA, the FRG and Israel" on his Twitter account. For Falk, Islam is "not only something purely contemplative. But it is something that affects all aspects of life including the social and political spheres." He sees it as his task "to refresh and update the political consciousness of Muslims a little bit."

Falk, however, says that he has little to do with the mainstream of Salafism which focuses on missionary work. "That is something that doesn't suit me at all." But despite differences of opinion with other leading figures of the scene, Falk's services are gladly accepted by Salafists of all currents when they are faced with arrest or house searches.

Falk prays almost exclusively at home. He is no longer welcome in many mosques, which he also attributes to state pressure. "The mosques are afraid of being banned if they ignore the instructions of the state security agencies."

He is a man who paints a picture of a highly gifted idealist on dangerous ground, stylizing himself — and his religion — as a victim.

On Friday, read part V of our series: Battling Salafism on Germany's streets

Coronavirus: How Germany is preparing for a vaccination drive

1 Million COVID infections in Germany: What have we learned?