Researchers around the world are developing a safe and effective vaccine against SARS-CoV-2, the virus that causes COVID-19. Here's a look at their progress so far. 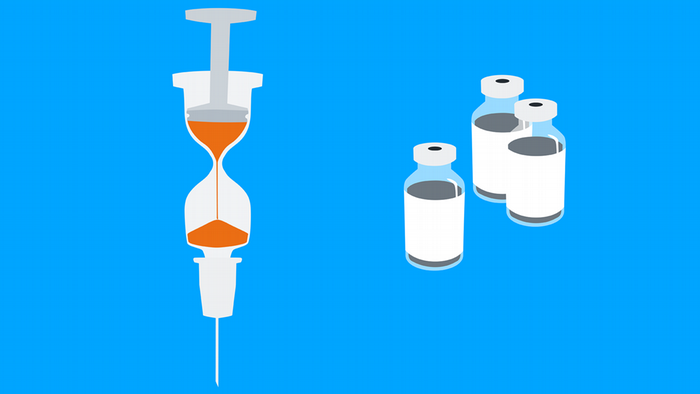 There are over 50 clinical trials worldwide, testing potential vaccines, known as candidates, against COVID-19. None of the vaccine candidates have been approved in the United States or the European Union.

How far have researchers got in the development of a vaccine?

The majority of vaccine candidates for COVID-19 are still in a pre-clinical phase. That means the candidate vaccines are being tested in animal experiments, for example, rather than with human patients. 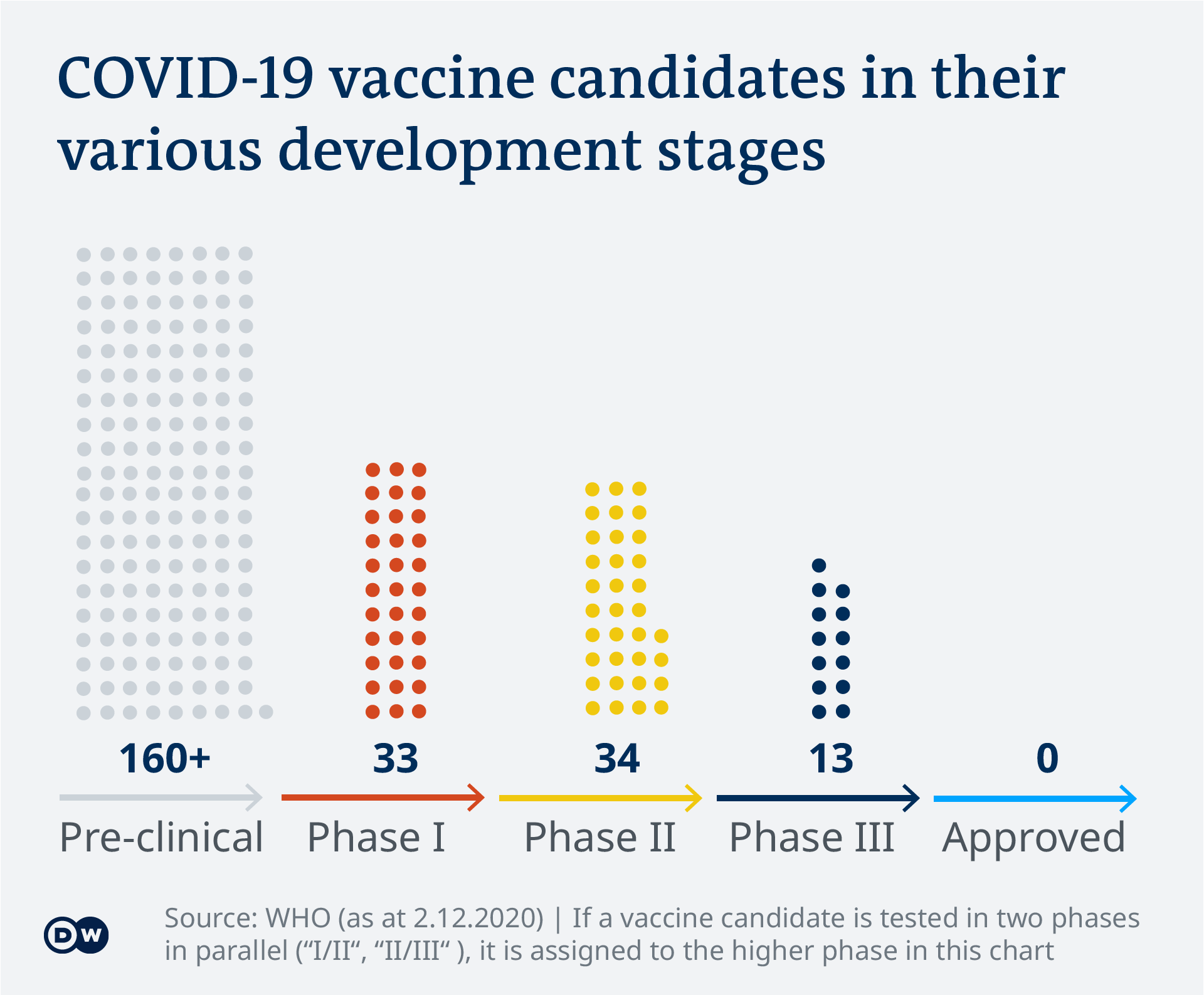 Please note: So far, two vaccines have been approved in different countries. To be displayed as approved in the chart, a vaccine needs to be either approved by the US-American FDA or the European EMA, or cleared for emergency use by FDA, EMA or WHO. More details can be found here.

Some companies, such as BioNTech-Pfizer in Europe, and Sinovac in China, have tested their vaccine candidates in several trials in parallel. For example, they have tested the same vaccine but in different age groups or with different dosages.

If clinical trials are successful, a company can formally apply to regulatory bodies to have their vaccine approved for use by the general public.

Three regulatory authorities are considered to be particularly important in this context: The Food and Drug Administration (FDA) in the US, the European Medicines Agency (EMA) and the Pharmaceuticals and Medical Device Agency in Japan.

What happens after a vaccine has been approved?

When a vaccine is approved, it doesn't mean everybody can get it immediately.

First, the vaccine has to be produced on a mass scale. With COVID-19, manufacturers aim to produce billions of doses by the end of 2021.

Second, logistics experts have to ensure appropriate distribution of the vaccine, and society has to decide who gets the vaccine first.

Read more: Can a vaccine be given out fairly?

In the end, though, it will be up to each individual to decide. A survey of more than 13,000 people in 35 countries most affected by COVID-19 showed that the majority of people asked would choose to get vaccinated. 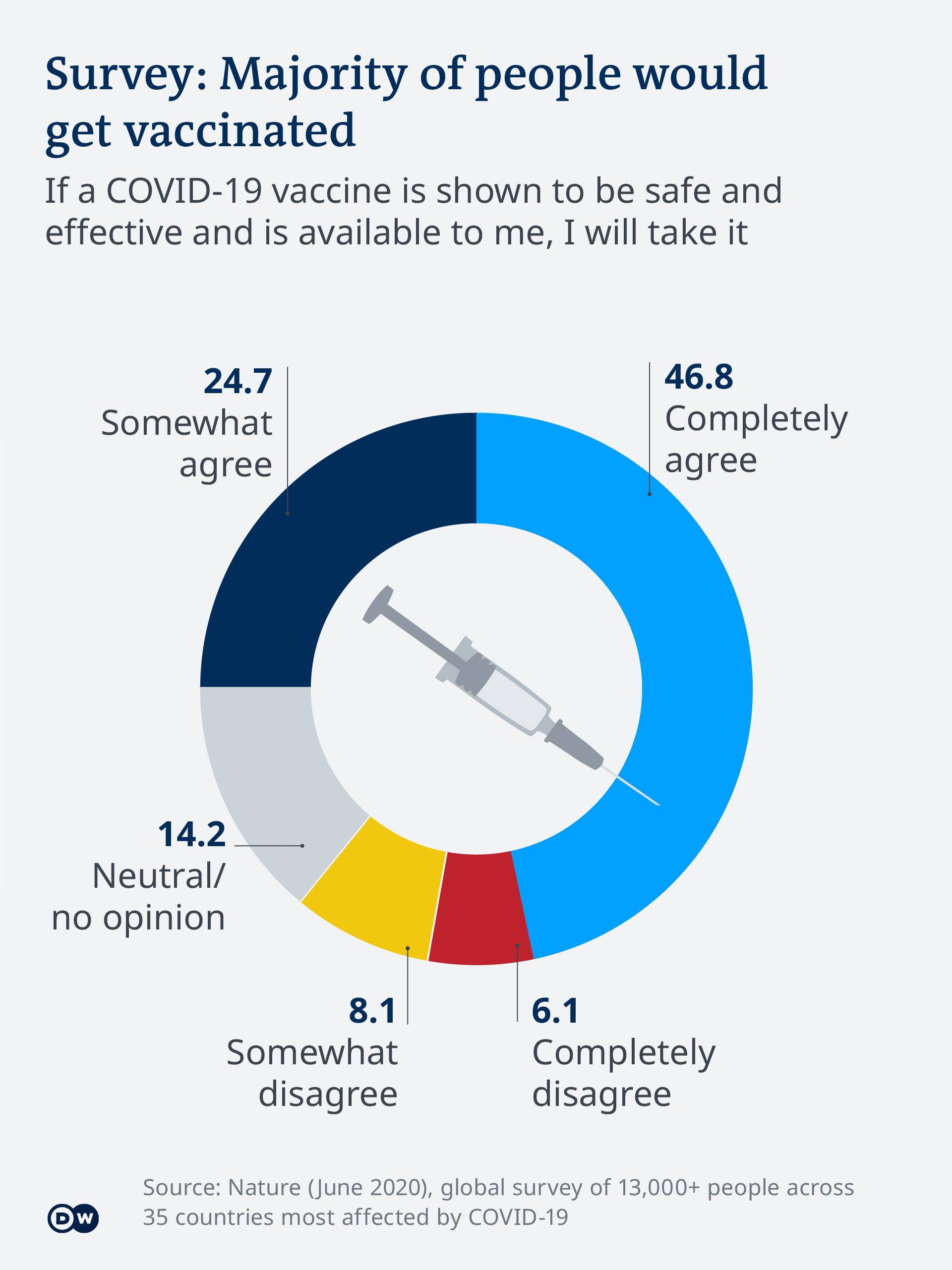 When can we expect a COVID-19 vaccine?

It can take several years to develop an effective and safe vaccine. On average, it takes between 10 and 12 years, but it can take longer. The search for a vaccine against HIV has been going since the early 1980s — and, so far, without success.

In the case of COVID-19, researchers are racing to shorten the time it usually takes because of the ongoing pandemic. Despite the pressure that that brings, vaccine developers, manufacturers and the World Health Organization (WHO) say there will be no compromises on safety. 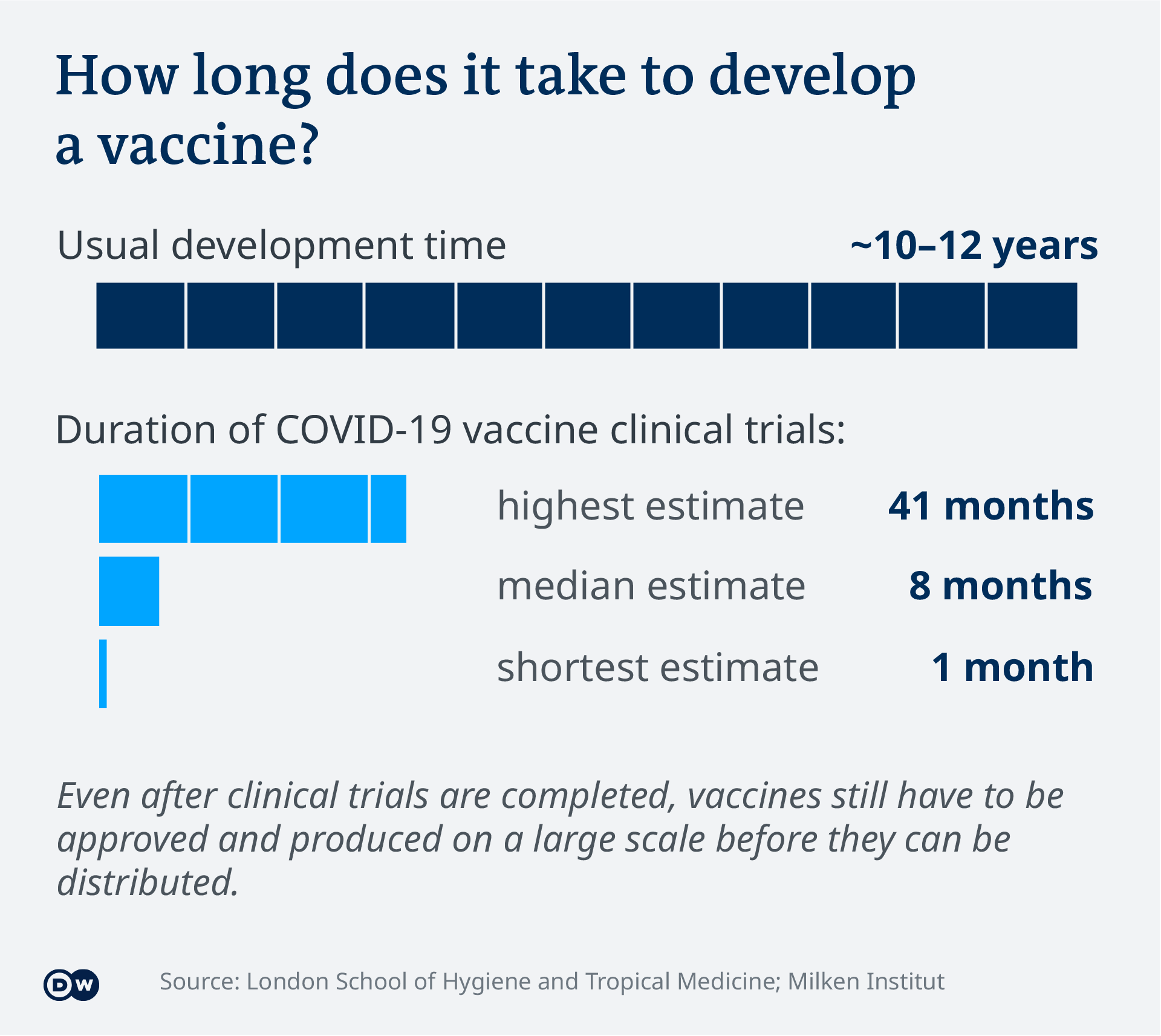 Research teams are aiming to accelerate, or limit, the time it takes to get to approval during the pandemic to an average duration of eight months.

However, that will only be the beginning. Once clinical trials are successfully completed and a vaccine is approved and produced, researchers start phase IV, during which they observe the progress of vaccinated patients.

Which types of vaccine are in development?

Researchers are pursuing 10 different approaches for vaccines against COVID-19. 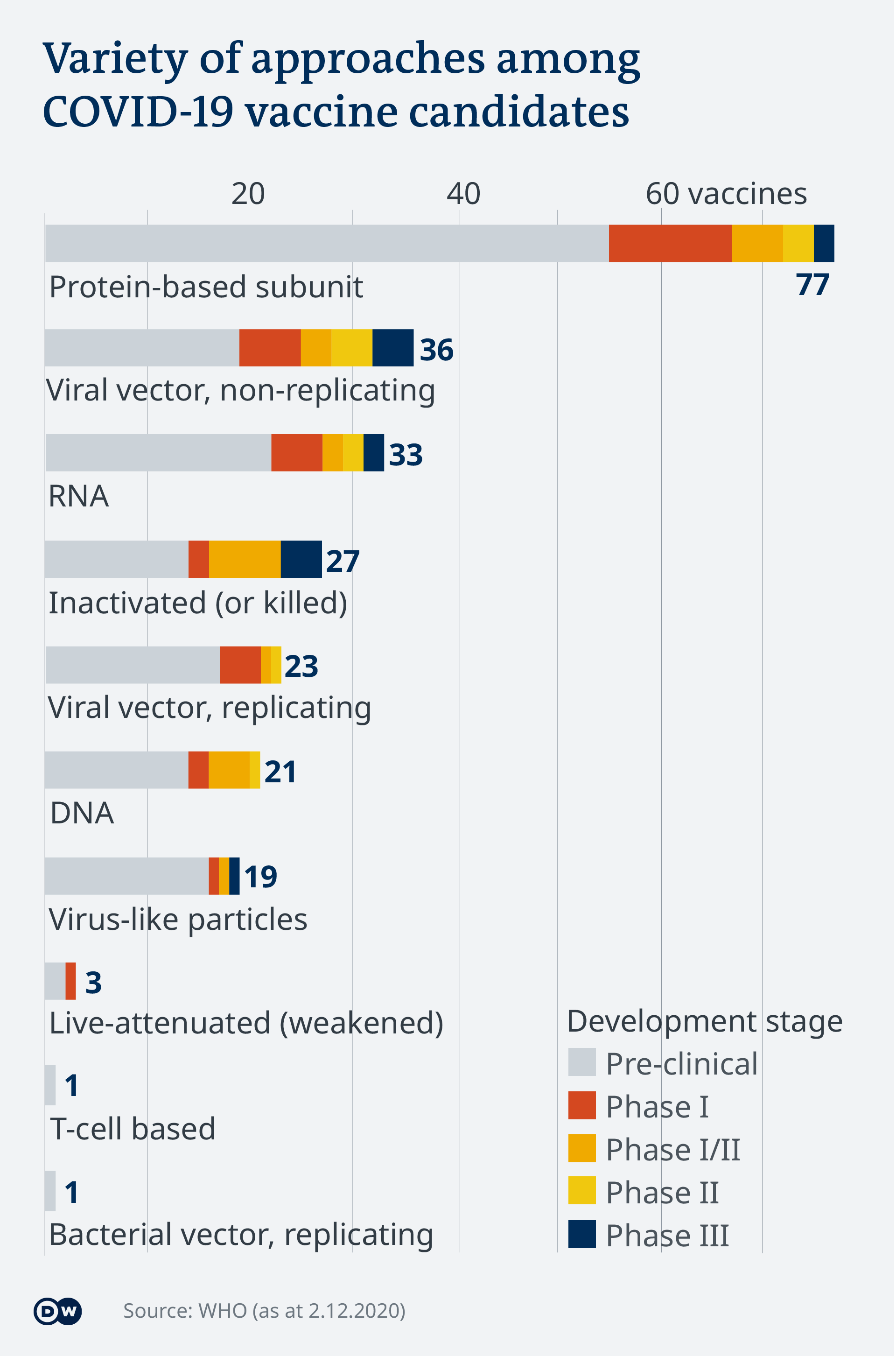 Most of the vaccine candidates use a protein-based subunit — so, instead of using a complete pathogenic virus, they are built on a small component of it, such as a protein found in its outer shell.

That protein is administered to patients in a high dose, with the aim of inducing a fast and strong reaction by the human immune system.

The hope is that the immune system will "remember" the protein and trigger a similar defense reaction if or when it comes into contact with the actual virus.

Vaccines against hepatitis B and HPV (human papillomavirus), for example, are based on this principle.

Four additional approaches have made it to phase III.

Non-replicating viral vectors are a type of so-called recombinant vaccines: Researchers modify the virus' genetic information by switching on or off or altering certain functions. By doing that they can, for example, reduce the infectiousness of a virus. Such genetic modifications, however, require that science already has detailed knowledge about which parts of a virus' genetic material are responsible for which functions in order for them to be able to manipulate them effectively. The term "non-replicating" means that the virus in the vaccine enters cells in the human body but is unable to reproduce there on its own.

Inactivated vaccines use a "dead" version of the pathogen. They tend to provide a lower level of protection than live vaccines. Some vaccines in this class have to be administered several times to achieve sufficient immunity. Examples of inactivated vaccines include ones against influenza and hepatitis A.

RNA vaccines follow a different strategy, without using any "real" component of the virus at all. Instead, researchers aim to trick the human body into producing a specific virus component on its own. Since only this specific component is built, no complete virus can assemble itself. Nevertheless, the immune system learns to recognize the non-human components and trigger a defense reaction.

Vaccines based on virus-like particles use another approach: Researchers only use the empty virus envelope — without any genetic material inside of it — to train the immune system.

Who is working on a COVID-19 vaccine?

At time of writing, there were well over 100 research teams worldwide developing a COVID-19 vaccine. So far, 11 teams have advanced their candidate vaccines to the third phase of clinical trials. 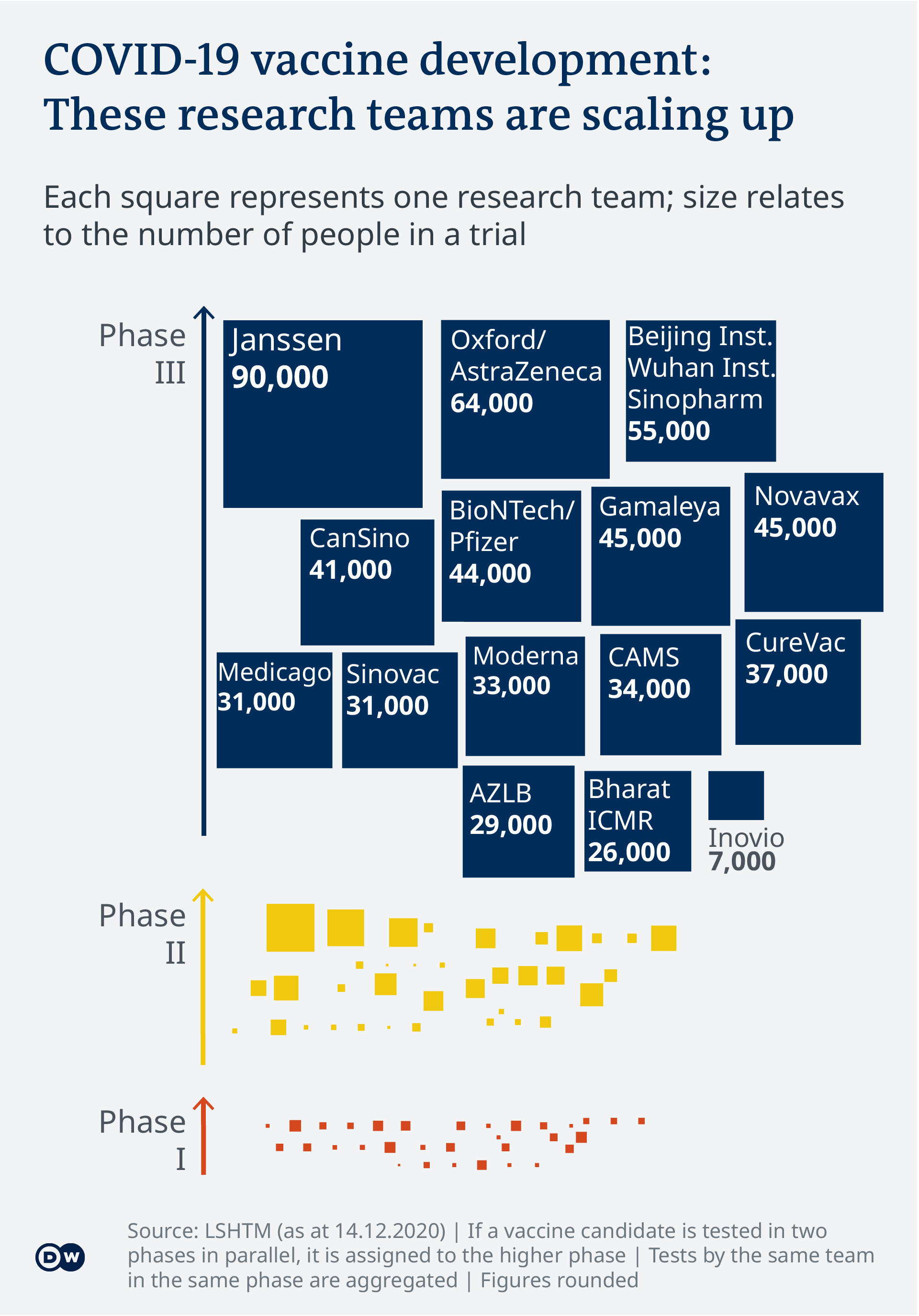 Five teams stand out for conducting the most extensive clinical trials:

US pharma firm Moderna says its COVID-19 vaccine is 94.5% effective

Moderna said that Phase 3 stage analysis suggested its coronavirus vaccine could prevent COVID-19. The news comes a week after Pfizer and German drug-maker BioNTech announced a vaccine of their own.

Coronavirus vaccines: What do we know so far?

The first COVID-19 vaccines will soon be licensed for public use and the EU has already secured access to a share of the doses. Yet many questions surrounding safety, efficacy and logistics remain unanswered.

The German government is expecting a COVID-19 vaccine to be available for parts of the population early next year. Three firms are to be subsidized by the government to research potential vaccines.